Tonight
A 40 percent chance of showers, mainly between 10pm and 3am. Mostly cloudy, with a low around 48. Northwest wind 8 to 10 mph.
Monday
A 10 percent chance of showers before 7am. Partly sunny, with a high near 63. Breezy, with a northwest wind 10 to 15 mph increasing to 17 to 22 mph in the afternoon. Winds could gust as high as 31 mph.
Monday Night
Mostly cloudy, then gradually becoming mostly clear, with a low around 41. North northwest wind 6 to 16 mph, with gusts as high as 24 mph.
Weather forecast provided by weather.gov.
Search 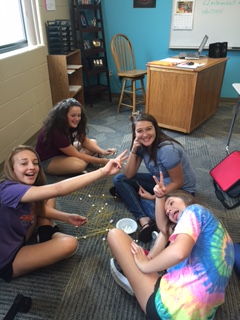 The 8th graders started their first day in science making towers out of spaghetti and marshmallows!  Of course, the group with the tallest, free standing tower was awarded with candy!